An important thing to clarify before getting into detail on what non-binary means, and my own experience as a non-binary person, is what the difference between sex and gender is, and why it’s important. 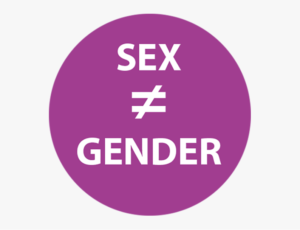 Our sex is usually determined at birth by a doctor, who looks at our genitalia and decides if we’re ‘male’ or ‘female’. Gender is a broad term that can include our gender identity, expression - how we dress, act and speak, and the gender role(s) we perform in relationships, and in general.

To put it another way, sex refers to what separates us biologically, while gender encompasses how we identify, express and think about ourselves.

A cisgender person is someone whose assigned sex and gender are aligned, while trans or non-binary peoples’ assigned sex differs from their gender.

I’m going to focus on gender here, but I’ve linked a few resources that discuss the sex binary at the bottom of this post - as it is absolutely fascinating, if challenging, reading!

What is the gender binary?

Gender binary is a term used to describe the ‘male’ vs. ‘female’ divide embedded in nearly every aspect of our lives. In other words, the idea that what is in your pants determines whether you enjoy stereotypically ‘male’ or ‘female’ things.

One example can be found in the marketing of kids’ toys - the ‘boys’ toys section full of NERF guns and cars, compared to the ‘girls’ section full of dolls, play makeup sets and tiaras.

So what does it mean to be non-binary? 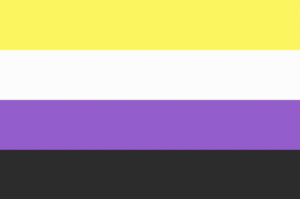 I visualise gender as being on a spectrum, with elements of masculinity, femininity, and androgyny dotted across it. To think of it as a straight line between ‘male’ and ‘female’ is too simple, as even cisgender men and women have, and celebrate, traits of the ‘other’ gender.

Freedom from the binary

After a close relative ‘came out’ as non-binary, I read books, listened to podcasts, and consumed lots of gender-related media to make sure I could support them as much as possible. At least, at the time, that’s what I convinced myself! In hindsight, I’ve always felt unsettled or uncomfortable in my gender, while also being infuriated by the traditional gender binary. Throwing myself into research brought these feelings to the surface, and made me reflect on who I am and who I want to be. 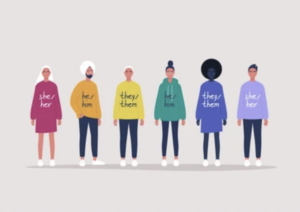 I began using the non-binary gender label and using they/them pronouns a year ago. In practice, this meant ‘coming out’ to my friends and family and asking them to replace she/her pronouns with they/them when referring to me. I also began dressing and presenting in a way that felt more me - I cut my hair and changed the type of clothes I wore. Since this change, I have felt much happier and more confident, and less like I’m somehow out of place.

Now, I like to just exist within my own definition of gender. I would describe myself as sitting somewhere in between ‘masculine’ and ‘feminine’, but I like to pick and mix from all over the gender spectrum, like a sweet shop! Some of these choices are a conscious rejection of the gender binary and social norms, and others are decisions I make to be comfortable in my body.  I like to think of myself as a bit of a gender punk, not that you would think it if you saw me in the street!

I’ve had mixed experiences in being non-binary at work. However, Currencycloud has been welcoming and respectful of my gender identity, and I’m thrilled to be working somewhere that respects, and celebrates, who I am.

If you want to be a great ally for non-binary and trans people, you could: 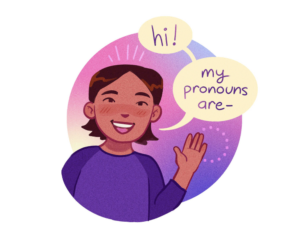 Gender identity is both very intimate and very public. For many non-binary and trans people to feel like themselves, they need to ask others to address them by new pronouns, change their name(s), and they may change their appearance. This means delicately balancing our intimate selves, with the reactions of others.

Every non-binary person’s experience will be different. The most important thing for us is to be treated with respect. If you’re unsure how to best make someone feel comfortable, respectfully ask!

If you’re interested in learning more about gender identity, I’ve listed a few resources below.

How to Understand Your Gender - Alex Iantaffi & Meg-John Barker

Can we say bye-bye to the binary? Getting Curious with Jonathan Van Ness - Episode 3

Sex and gender: What is the difference?

Sex isn’t binary, and we should stop acting like it is

What are gender pronouns and why is it important to use the right ones?

Understanding Non-Binary People: How to be Respectful and Supportive

By: Emily Shaw
Emily excels as a Project Coordinator within Currencycloud’s “Compliance Operations” team working on a variety of projects intended to improve our compliance framework. They also support our LGBTQ+ pillar in our "Equality & Belonging" squad.

The component economy – why build when you can borrow?

In the world of modern business, you need to understand the value of the component economy and how to make the most of it There’s a famous line from the Kevin Costner film...

At a recent roundtable event hosted by Currencycloud with Mambu and Elixirr, 20 C-Suite industry leaders discussed what the future holds for the banking landscape. We found...